From exploration to exploitation: A minerals adventure

The educational program "From exploration to exploitation: A minerals adventure" was developed as a two-to-three-hour workshop in the form of an entrepreneurship game, aiming at familiarizing undergraduate students with the concepts of Mineral Research and the Exploitation of a given ore deposit. The operational environment is developed in a network application, where the participants, through their computer, are invited to play the geoscientist’s role and direct mineral research activities from the preliminary research phase to the possible exploitation of the ore body Figure 1. 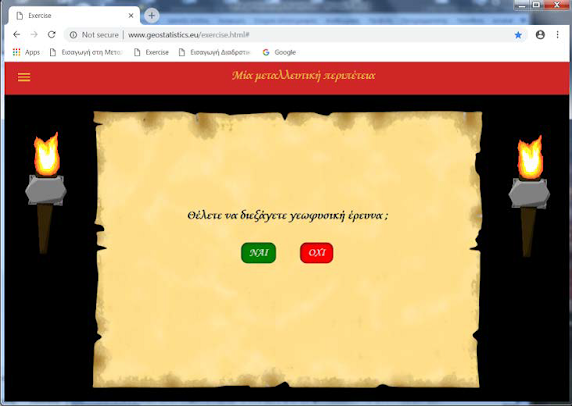 http://www.geostatistics.eu/introduction.html#
More specifically, the participants undertake the exploration of an area where there are indications of presence of an orebody of economic interest. An overview of the recorded experience of similar exploitations in the wider region reveals the a priori probability of existence of a deposit, as well as its expected size. Because this probability is not satisfactory, and in order to increase the information on the existence or not of a deposit, there is the possibility to conduct a geophysical survey of the subsoil, which, as also shown by the experience in the wider area, has a certain credibility.

If decided to proceed to the next stage of main investigation, funding for exploration drilling should be sought. The amount of funding, and ultimately the number of boreholes that can be executed, will depend on the final probability of finding a deposit. This probability will have to be calculated based on the results of the survey so far. However, in any case, the probability to be reported to the sponsor will be examined by an independent researcher for a crosscheck. In case of a dispute, there will be a pecuniary penalty, which will reduce the number of drillings available. Drilling takes place on a predetermined square grid. After a drilling has been carried out, the value of the useful ingredient content will be assigned to the entire block.

The survey should end with ore reserves estimation. The grade of a block is calculated as the average of the samples surrounding it. Upon completion of the survey, and if results are encouraging, the user has the possibility to proceed with the exploitation of the field. In this case, economic data are given, concerning the marginal content of the useful ingredient, the price of the ore, its specific weight and the extraction costs of each block. By selecting a block, the user proceeds automatically to the mining and then to forward it for further processing and sale, if its actual content exceeds the marginal value, or, if it is not, to store it in a stockpile. Up to all blocks can be mined, but the user should also keep track of his current balance (Figure 2). He can stop the operation at any time, so he will be informed about his performance score. 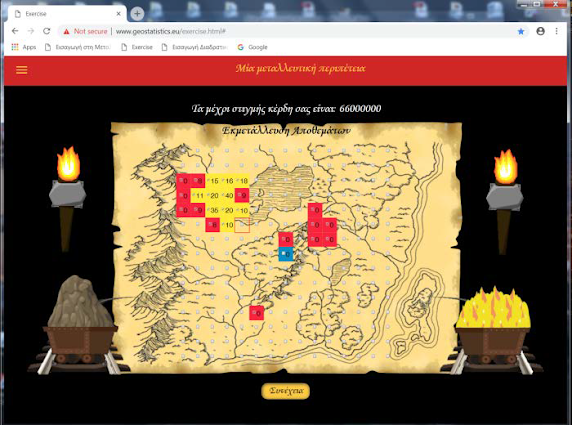 http://www.geostatistics.eu/exercise.php
The final score of each user will be determined according to the profit from the sale of the ore he has mined in relation to the best he could have achieved (Figure 3). Finally, he has the opportunity to enter his score in a list, where he competes with the rest of the participants to get the best position. 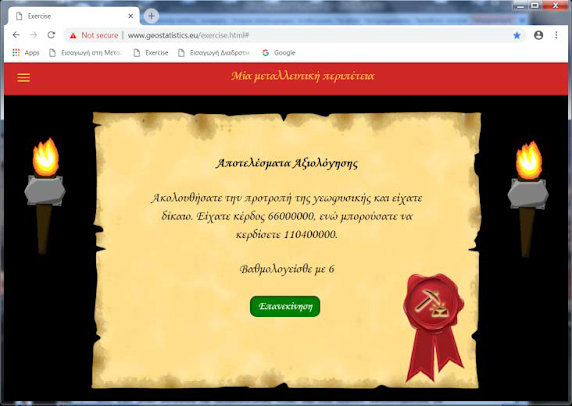